I just went on such a wonderful vacation. 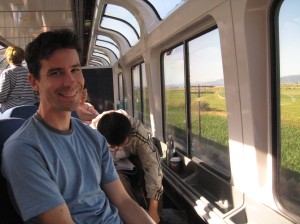 First off, I had a great traveling companion in David. I was absolutely willing to drop my 3-page a day journaling habit for the duration of the trip, but he reminded me daily that vacation is as good a time as any to take the time out to write about your thoughts. So I kept up with my journaling, daily. As did David. 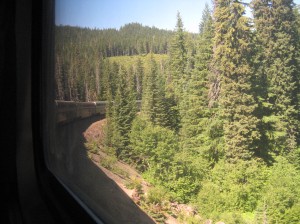 We took the train from Davis, leaving on the Coast Starlight at 11:30 on a Tuesday night and arriving in Portland shortly after 4pm Wednesday. Our friend Emilie greeted us at Union Station and promptly took us to her favorite food cart pod, where I got truffle oil french fries with herbed aioli at one truck and a fresh juice smoothie at another.

Emilie and Jack were great hosts; Jack and David have known each other since birth, practically, and Jack and Emilie have only just moved to Portland earlier this year. I think they were as happy to host us as we were to crash at their place! Their apartment in West Linn was spacious and comfortable with a great patio and a brand new futon, so we were set. We bought daily transit passes and got a ride from a stop right across the street from their place to anywhere we wanted to go in Portland via bus and train. We had cheap but good breakfast in a shady diner with a bullet hole in the window downtown before stopping in at a gallery to see some truly fascinating albeit disturbing art on our way to wait in line for half an hour with all the other tourists to get our Voodoo Donuts and then go for a walk along the Willamette. 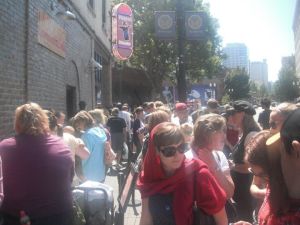 Back in West Linn, we went for a walk in a park that turned out to be more like a hike through a phenomenally gorgeous natural setting with a deep woods canopy, and a trail down a serious grade to a lakefront with grand boulders and thorny bushes full of all the ripe, sun-warmed blackberries we could ask for. On a pebbly beach we looked for flat rocks for skipping and pretty rocks for souvenirs. I took home about a dozen.

After the park (and the great hike back up to civilization), we got back on the bus to downtown where we played video games and pinball at Ground Kontrol, a video arcade/bar where a grilled cheese sandwich with tomato soup is a regular menu item. And yes, that’s what I had for dinner there.

We could have stayed in Portland for our entire trip and never run out of things to do (my god we didn’t even go to Powell’s), but there was more northwest to be seen, so we took to our rental car and bid Jack and Emilie adieu and drove north to Lacey (first stopping at a Shari’s for lunch; it had been years since I ate at a Shari’s…), where we stayed with my aunt and uncle, who have elevated the act of hosting houseguests to an art. Everything there was comfort and amenities (want to use the hot tub? Go right ahead! We’re grilling salmon for dinner, and making fresh blueberry pie for dessert, that okay?), and just the joy of being around family who I so rarely get to see. We also made trips into Olympia, to the assisted living facility where my grandma lives, to stop in and visit her. My grandma helped raise me, so spending time with her is always a real pleasure. She moves surprisingly well for an eighty three year old; she is still exactly as I remember her, just a little slower is all.

We didn’t get to spend a ton of time in Olympia or with the family because the whole reason for the trip, the thing that put us on the road, was to celebrate the wedding of my good friend Jeremy to his wife Holly. I’d never met Holly, and David had never met anyone there, so my level of social anxiety was just a little high. But then I saw my friend Rick who I’d known would be there– he was Jeremy’s best man, naturally– and he said “we’re inside watching Arrested Development” and I thought, okay, this is going to be an okay wedding. And it was better than okay. It was inspiring. It was genuine. It was a joyous occasion. I went in with the slightest hesitation that there was no way that a wedding could measure up to to the level of exceptionalism that my friend Jeremy represents, but I was proven wrong. Best. Wedding. Ever.

All that was left of our excursion after that was a trip to Seattle to cram the ultimate tourist experience of the Emerald City into one sunny summer afternoon. We tried to get lunch at the Space Needle but got denied– no reservations. So instead we got pizza around the corner at a local chain called Zeek’s (our pizza, the Quentin Florentino, was exceptionally tasty) before buying our tickets and waiting in the line to take the elevator to the observation deck. It was a pretty spectacular view, but altogether too crowded and noisy.

Then we took the monorail downtown and checked out Pike’s Place, but not before getting lost and walking to Lake Union first. Pike’s Place was more of the Space Needle madness but at a ground level– lots of crowds, lots of noise. We skirted it and didn’t even stop to watch the fish-throwing, because of all the  people. The waterfront was great, though. And before we headed back, I stopped back in at Pike’s Place to buy a bouquet of flowers to take to my Grandma the next day.

Grandma seems to have the opposite of the sundowner’s syndrome– she’s more alert in the afternoons and evenings than the morning. The morning of the last day of our trip, David and I went to visit Grandma one last time, to take her the flowers and say goodbye, before heading back to Portland. We looked at some old pictures and some more recent ones (the best set, from her 75th birthday party, features the whole darned family), and lost all track of time. When I realized it was after noon, and we really had to go to return our rental car on time, we said hurried goodbyes and I felt and hoped, like I always do, that I’ll be back to see her soon. I hate that my “soon” always seems to stretch into years. 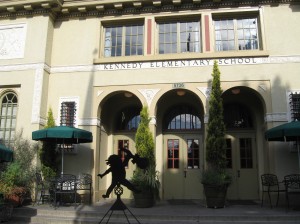 Back in Portland, we returned the rental car, then Emilie picked us and our luggage up for a late lunch at McMenamin’s Kennedy School before dropping us off at PDX. It was the first time any of us had been to the Kennedy School and we were all appropriately delighted. We had delicious lunch and beers in the Courtyard, delighting in the happy hour prices that our late lunch/early dinner meant. I found myself fantasizing about a possible future in Portland, it was such a great time. But during our hassle-free and blessedly swift flight home, looking out over the hills and trees and all that cloudy gray over lush evergreen, knowing just how damn much it rains there, I thought, nope, not for me, no way, and began immediately planning my next adventure: a road trip across the southwest, and most especially to Tuscon and Las Cruces. I just have this feeling that there is what’s next, and can’t wait to get there and see what it feels like.